October is National Disability Employment Awareness Month, with an official theme of Increasing Access and Opportunity. Throughout the month, we will be posting stories about adults with SMA in the workforce and are pleased to share this story about Kayley Shade. 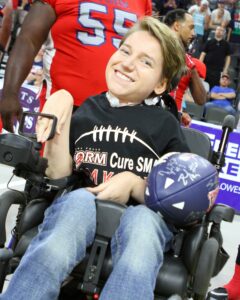 Kayley Shade is a 28-year-old sports fan from Hartford, S.D. She has lived with spinal muscular atrophy (SMA) since she was a baby, but more importantly, she has risen through the ranks and is now the Director of Media Relations at an indoor football team near her home, called the Sioux Falls Storm.

Diagnosed at 16 months old, Kayley does not have memories of life without SMA. “SMA has greatly impacted my life. It has taught me that I can do whatever I want, as long as I give it my all,” she said.

Kayley graduated with a double major in Marketing and Marketing Design from Southeast Technical Institute in Sioux Falls. Her passion for football led her to work within the sports industry. “I love sports, but mostly follow football. My favorite teams are the Texas Longhorns and Dallas Cowboys,” Kayley noted. She started as an intern at the Sioux Falls Storm. “The owner was impressed with my work and hired me on full-time.”

In this field, every day is different. Kayley spends a big portion of her time creating graphics and social media posts, both in preparation for and during the season. Still, Kayley confirmed that the coolest part of her job is working for a football team she followed as a fan. While women working in sports still isn’t as common or accepted, that hasn’t fazed Kayley. “I have felt a little stigma but do not let it bother me because I know I’m more than capable of doing my job.” To help her manage her day-to-day work tasks, Kayley uses various tools, including more prominent features like an on-screen keyboard, Adobe Creative Cloud, and occasionally voice control. Even with these common tools, Kayley shares that the most frustrating part of her job is when her hands get tired from doing more manual assignments, such as creating graphics or writing a press release.

During National Disability Employment Awareness Month, Kayley reflects on the most impactful lesson she has learned: “Never let your disability get in the way of doing what you want.” Her advice to folks interested in getting into sports or media relations is to “learn how to write and be creative.”

Kayley’s Tip for People with SMA in the Workforce:

Never give up and always believe in yourself. You know you better than anyone, so don’t let anyone tell you can’t do something!